A solar cooler that doesn't need ice. The Chill can keep food cold, frozen, dry, and organized - no ice required.

Use the sun to make ice, not melt it.

Rain, clouds, & snow. If you can see a shadow, it will charge.

To keep the adventure going, we minimized space needed for ice and fuel and maximized space for fresh food, cold drinks, and fun times.

Chill | How it Works

The Chill can keep food cold, frozen, dry, and organized - no ice required. SolarPanel charges the PowerBank+ to keep you cooling day and night.

GoSun Chill can be powered by multiple power sources, including: Powerbank, AC Adapter, 12 Volt Cord (car port charger), Solar Table, or Flexible Solar Panels. This way, you can access the most convenient power sources when you need it. To charge the Powerbank, plug in the included AC Adapter into any wall socket (100-250VAC) or use one of our two solar charging options - the Solar Table or Flexible Solar Panel. 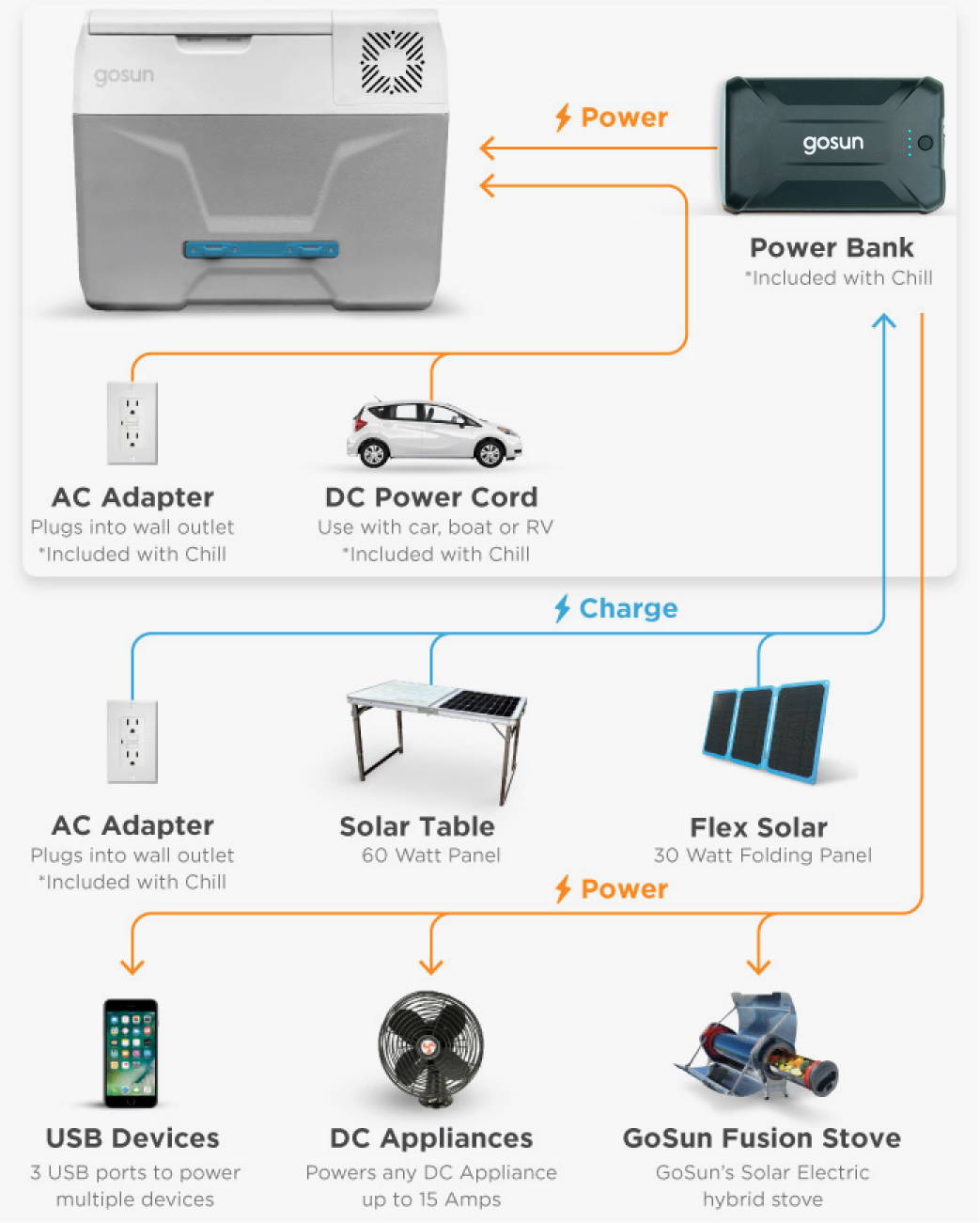 United States
I recommend this product
Chill out

So I've had for almost a week and so far, so good. The quality seems really good. I've run a number of tests. The first few days I ran some unofficial testing at freezing temps. I say unofficial because I was just trying things left and right, I threw in warm stuff in the middle of testing and the battery is best for maintaining temps, not cooling down. What I've found works best is when you start with cool stuff. Throw warm stuff in the cooler the night before and hook up to AC power. Then it freezes no problem. So I decided to do some tests based on how I would use it... pack it the night before and hook up to AC power and cool it down to 32F. Then hook up the next day to full battery. Test 1: For 9 hours, from 11:50 - 8:10, I ran at 32 degrees on battery w/ solar. Sunny all day, high of 76. Opened cooler 10 times. At the end, battery still at 3 of 4 dots (which means it was 75-99% charged according to manual). Test 2: For over 6 hours, from 9:15 - ~3:30, I ran at 32F degrees on battery only (no solar). Sunny all day, high of 90. Opened cooler 8 times. At 3:05, the battery was at 2 dots, cooler at 32F degrees. At 3:55, the battery was at 2 dots, cooler at 41F degrees due to F1 code (low voltage). Essentially, the battery disconnects at 9.6 Volts and reconnects at 10.9 Volts. As the battery loses power, there is less voltage. From what I could see, the battery needs to rest to recover its voltage. On a hot day, it can't keep up but still will turn on and run. You may have to raise the temperature some if you only plan to run off battery. But 6 hours at 32F degrees at temps<80F seems close to their claim of 10 hours at 40F degrees at temp=80F. But this is what I found impressive... At 4:01, I hooked up the solar panel. At 4:11, it was running and cooler down to 40F degrees. Battery at 2 dots and charging. At 5:04, cooler down to 32F degrees again. Outside temp was 90F degrees. Battery still at 2 dots but charging. Stayed this way until 6:29 when it hit the shade. Very impressed. So at refrigerator temps, you can run this thing all day with just battery and solar if you cool items in advance. My next tests: - Will full battery and solar be able to cool down warm drinks to 38 degrees? Then keep cool all day? - Freeze water bottles night before on AC power. Will full battery and solar be able to maintain frozen temps of 10, 15, or 20 degrees in sun for an entire day? My concerns: - Long term durability. Seems well made but we'll see. I wish the warranty was longer. - It says not to tip cooler more than 30 degrees when running or more than 45 degrees when not running. When you roll it, it's pretty much at 45 degree angle so that worries me some. If it does tip over, they say to leave off for 12 hours to protect the compressor. So I am concerned about that. I will probably always roll it with it turned off to be safe. It is very quiet. A light fan noise but much quieter than I expected. The cooler definitely holds 55 cans. And I've run it non-stop all week, no frost yet and very little internal condensation. Even if you don't need for camping, if you have people over to your house, I would get this thing just to plug in for parties. I'm sure I forgot something. Hopefully I can add to this review later after more tests. I couldn't find much about this online, I guess because it's so new. But I hope this helps.

I tried it out right away in the house and put several sodas inside and it ran for about 10 hours and still cold. Cannot wait to try it outside.

﻿
Product has been added to your wishlist.
You can view your wishlist by creating or login account.
Please create account through ##customer_email## email
Login Register
20